What is Pneumatic Toggle Clamp ?

• A Pneumatic Toggle clamps is a basically a Toggle Clamp actuated with a double acting pneumatic cylinder.

• The Clamps consists of a double acting cylinder, a clamping arm, linkages for multiplying the applied force, and a base for mounting at the workplace on its base. 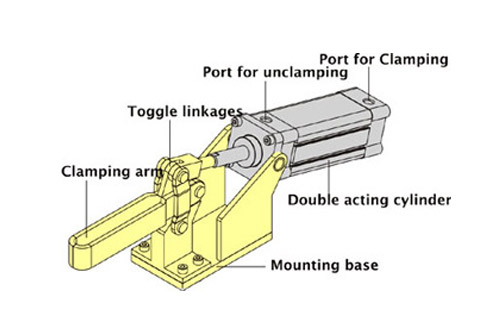 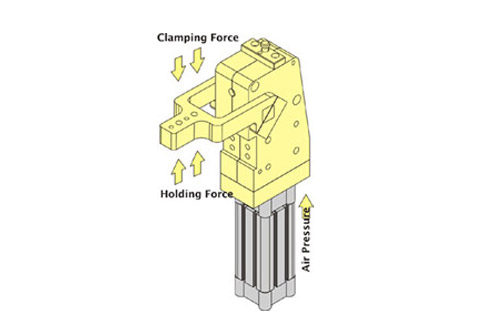 • The holding capacity mentioned for each clamp refers to the maximum force, which the clamp can withstand after being over-centered without damage to the clamp and without the toggle unlocking due to distortion of the clamp.

• The over-center dimension is carefully chosen in relation to the elasticity of the clamp to maximize clamping force while ensuring that the clamp locks closed even under vibration or intermittent loading.

• Clamping Force, the amount of force actually applied to the work piece by closing and locking the clamp, is generally less than the stated holding capacity. Actual clamping force depends on many factors including; spindle position (clamping arm length), cylinder bore, cylinder area, available air pressure and the clamps mechanical advantage. In most cases, the Clamping force is roughly 2 to 3 times the force exerted by the pneumatic cylinder.

• Steel Smith strongly recommends using of clamping arms as per its specified data. Using heavier and longer clamping arms on smaller clamps may disturb the smooth movement of the clamp linkages and also a higher wear and tear in its pins & bushes. Please ask for data sheets on each clamp to know the maximum permissible clamp arm usage for that particular clamp.